Civic movement “Love against Homosexuality” (LAH) began forming in Ukraine in 2003. The first public action took place on September 21, 2003. A group of concerned people met on the Kyiv central square in order to tell the people all the truth about homosexuality and prevent the planned gay-parade scheduled for the same day.

Participants of the action spent three hours holding placards against homosexuality, e.g. “Homosexuality = AIDS”, “You’re not born gay, you become gay!”, “There is no single-sex love”, “Ukraine is a Christian country”, “Homosexuality – Enemy of the Family” etc. They also handed out over 3,000 especially prepared leaflets. The action attracted the attention of thousands of people in the center of Kyiv. Since then, street actions of the “Love against Homosexuality” Movement in the capital and other regions of Ukraine have become a regular event.

Today, “Love against Homosexuality” is more than just street action. It’s a registered civic organization. Its primary activities are:
— street education action;
— appearances on mass media outlets;
— support for social initiatives and politicians in support of traditional family values;
— publishing and dissemination of education materials;
— cooperation with the authorities in protecting traditional family values;
— lobbying for a law prohibiting homosexual propaganda in Ukraine;
— training sessions for civic and religious organizations.

Any activity dangerous for national security should be prohibited and legally punishable! Popularization and acceptance of homosexuality is a danger to national security because:
1) it automatically leads to an AIDS epidemic; over one-half of all HIV-positive people in EU countries are homosexual;
2) it exacerbates the existing demographic crisis in Ukraine;
3) it destroys the institution of family, which is fundamental to any country’s successful development, including economic;
4) it infringes on fundamental human rights, e.g. freedom of speech, freedoms to follow and publicly exercise a religion, etc.

These are the reasons why the Movement has been leading a national campaign to pass a law to ban homosexual propaganda since 2007. During this time, tens of public actions took place in Ukraine supporting the initiative. Finally, on June 20, 2011, Verkhovna Rada registered Draft Law #8711 “Regarding protection of children’s right to a safe information environment”, which prohibits homosexual propaganda. The Draft Law was co-authored by 6 MPs from all the primary factions.

The Draft Law collected over 100,000 signatures demonstrating public support of a ban on homosexual propaganda. It was also approved by Rada Committee on Freedom of Speech and Information. Major churches also spoke out in support of the document.

MANIFESTO
We are living at the height of the “homo-revolution” era. More and more often do the sexual minorities take off their masks, exhibiting their dictatorial ways, revealing their only goal – to install a totalitarian regime. They use democratic slogans only to destroy democracy and install a HOMO-DICTATORSHIP. We can already see the early signs of this, when, for example, a priest in Sweden gets imprisoned for calling homosexuality a “cancerous tumor on the society’s body”. In Britain, a clerk was fired for refusing to register a same-sex marriage. How can we talk about democracy, freedom of speech, conscience or religion? The LGBT-community supports an entirely totalitarian ideology, which aims to eradicate any dissent.

Today, we can and should talk about discrimination against a healthy majority, against the family. Many countries have already begun persecuting and sidelining those who stand against homosexuality. The LGBT-grouping will not rest until it gains total control over society. Anybody who considers homosexuality to be a sin, amoral behavior and perversion will be subjected to persecution, humiliation, penalties, and imprisonment for “intolerance”.

Homosexuality is a parasite of the society. It exists and survives only thanks to the existence of the heterosexual majority, which gives birth to future generations. Homosexuality is a culture of extinction. Accepting homosexuality means agreeing to the degeneration of your nation. No homosexual community can be self-sufficient.

Homosexual ideology is passionary in nature. If we don’t counteract its apologists, they will not stop. If they achieve anything, then it’s by our leave. Any healthy society should stand tall, united, in order to defeat the virus of homo-dictatorship. Otherwise, the consequences will be direr that most people imagine.

IMPORTANT
All-Ukrainian Civic Organization “Civic Movement of People with a Future “Love against Homosexuality” (LAH) does not condone, much less employ any physical violence against people leading or supporting a homosexual way of life. LPG does declare its unambiguous and decisive support for the traditional institution of family and encourages any governmental action to preserve and strengthen legal union between man and woman for the good of the society and the future generations. Any illegal acts of physical violence against sexual minorities will not find support with LPG and its methods.

In June 2010, the Movement’s executive and administrative functions were transferred to a special collective board – the Committee. 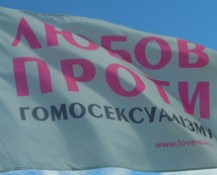