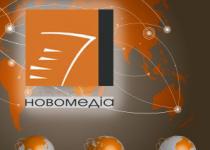 In late December 2012, Novomedia received the official confirmation of its status change from all-Ukrainian to international. Novomedia has long been working outside Ukraine, with its membership cards issued to citizens of a number of countries.

Throughout these years, journalists from neighboring and far-abroad states had continuously appealed to the Association’s office in Kyiv, suggesting to expand the mission far beyond one country.

It is important to note that Novomedia members and event participants represent countries as diverse as Ukraine, Russia, Canada, Germany, Kazakhstan, Belarus, Moldova, Latvia, Estonia, Kyrgyzstan and Norway, among others. In their turn, Novomedia members participate in various friendly international events, such as National Religious Broadcasters forum in the U.S. and the forum of Christian Television and Radio Journalists Association in Russia.

Now that the status change has been legally finalized, Novomedia is an international organization both de jure and de facto. “A number of considerations have been prompting us towards this decision. The official status change is a fully logical step for the Association since it has been working internationally for years now,” — pointed out Ruslan Kukharchuk, Novomedia President.

The Novomedia mission is to eliminate confrontation between churches, religious organizations and secular media, as well as to help journalists cultivate timeless Christian values in their professional life. The Association was founded in 2004.