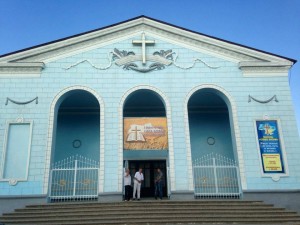 Vsi Razom Civil Movement has conducted monitoring of the facts of religious persecution on the occupied territories of the Donbass. All the information representing acts of violence done to Christians and clerics has been carefully charted. Data as to cases of church buildings and other property capture has been recorded. Besides the current state of the persecuted Christians and their possessions in the so called LPR and DPR has been described.

Ministers of evangelical churches and their property are among the most affected. Clerics of the Greek Catholic Church, Roman Catholic Church and Ukrainian Orthodox Church as well as their property have also been subject to violence. Pro-Russian gunmen terrorized churches and ministers in Donetsk and in the towns of the region among them are Sloviansk, Horlivka, Shakhtarske, Druzhkivka, Torez, Debaltseve. And also in Luhansk and Luhansk Region such as Antratsyt, Pervomaiske, Krasnyi Luch, Rovenki.

There has been a documented fact of the killing of seven pastors and clergymen. Over 40 church ministers have been detained and later released upon being beaten and interrogated during their detention. Buildings of 12 Christian communities, a Christian shelter for homeless children, a Christian university, three rehab centers for drug addicts and alcoholics were captured throughout 2014. Apart from that five church buildings were severely damaged as a result of shelling. Three of the buildings were burned to the ground.

Seized church buildings are used by the militants as their headquarters, ammunition depots and troop housing spaces. Supporters of the so called DPR and LPR steal cars, money, documentation, office equipment and household appliances and even children’s toys from ministers and churches.

Due to the military situation in the Donbass some religious communities have ceased to exist. Many Christians have no other way but to do hold meetings at their homes. Thousands of Christians from Donetsk and Luhansk regions as well as Crimea have become forced migrants, moving to other parts of Ukraine.

»Freedom of religion’ is one of the basic principles of democracy. The right to practice Christian faith is a fundamental right of a person. Facts are speaking for themselves – these principles and rights are being trampled upon everywhere on the occupied territories of the Donbass. Ukrainian authorities and the international community should pay careful attention to this frustrating situation and prevent it from further development and expansion. Persecution of Christians in the so called DPR and LPR should stop and seized church buildings should be taken back to religious communities”, — says Ruslan Kukharchuk, head of Vsi Razom!

This report has been prepared by the experts of Vsi Razom! as part of a research on the topic of religious freedoms in Ukraine as of January 2015. Data in the table is constantly updated and new information is added. Names of churches, clergymen as well as their contact details are not available for public out of safety consideration. However, Vsi Razom! is ready to provide this information to competent authorities and international organizations.

On the photo: The church building in Shakhtarsk wich was captured by pro-Russian gunmen