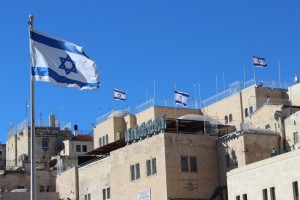 Ukraine has been under shelling for 9 months. And it is only now after 23 years of independence that the big and awkward neighbor wants that we disappear as a nation altogether.

Israel has been under constant fire from rocket attacks for 66 years. Since the day it was first established as a nation every single neighboring country has wanted it to disappear. Some of them are still looking out for that to happen.

Ukraine being under attack from the separatists is a relative idea to a certain level. It is literally true only for 10% of its population residing in the east. The majority of Ukrainians haven’t even seen the war firsthand because of it being hundreds of kilometers away.

On the other hand Israel being targeted by the Islamic militants isn’t relative at all. The country is only about 135 km across at the widest point. And the average distance from Israel’s boundary with Palestinian Autonomy to the Mediterranean Sea is only about 30-40 km. That means Israel’s territory perfectly comes within reach of multiple launch rocket systems let alone missiles. And by the way both Hamas and its friends have quite enough number of the infamous Soviet Grad systems to keep Israel on constant alert.

One has to be completely unbiased when studying the history of conflicts. Using that approach let’s try to understand the underlying reason for the enmity between the Israelis and Palestinians. You think it’s about the land and territories? No, it’s not! Is it about the status of Jerusalem? Partially it is? The only fundamental (and irrational) reason for the permanent war is the Palestinian leaders’ refusal to acknowledge Israel’s right to exist. It has always been that way. So it’s not about the territories, but about existence rights.

In 1947 the UN General Assembly developed a partition plan for Palestine following the termination of the British Mandate which recommended the creation of independent Arab and Jewish States. The Jewish who hadn’t had a country of their own for 2000 years accepted the plan, whereas the Arab Higher Committee and the Arab League rejected it. All due to the fact that their best intentions did in no way envision the creation of any Jewish state. This is exactly the position still strongly held by both Hamas and Fatah leaders today.

Just some 20 years ago speaking in defense of Israel that was constantly targeted by Palestinian missile attacks was quite politically correct. Now that the Israeli state has become stronger than ever, international community and political situation have also undergone transformation. As a matter of courtesy in the West calls on Israel to hear the voice of the Palestinians and acknowledge Palestinian statehood have become commonplace. Respected journalists and prominent politicians have joined the rhetoric as well. As a result France, Sweden and Iceland have recognized Palestinian statehood. The UN General Assembly has granted Palestine non-member observer State status.

Small groups of rebel fighters will always be seen as heroes. Such is the reality of the world’s political elite. Talk about keeping things trendy? Palestine’s UN full membership is only blocked by the US which possesses the veto right in the UN Security Council.

Let’s get to the core of things – Israel IS ready to join more than 100 nations and recognize Palestine’s statehood. That’s right! It might come as a surprise for some of you out there, but Israel doesn’t mind at all that Palestinians should have a state of their own. However, there are two simple conditions to be met: 1) Israel’s right to existence must be recognized; 2) all terrorist groups in Palestine (including Hamas) must disarm.

As it has been said earlier Ramallah and Fatah aren’t keen on the former. Whereas the latter is unlikely to happen. Why? There are scores of smuggling tunnels between Egypt and the Gaza Strip used to smuggle weapons.

On 25 December a group of Ukrainian journalists and I were at Novomedia press tour in Jerusalem. As part of our visit to Israel’s Foreign Office we had a long conversation with Zvi Rav-Ner – the Deputy Director General Head of Eurasia Division of the Ministry of Foreign Affairs. “We are not opposed to the existence of the State of Palestine”, — he said unambiguously.

He then added: “Such talks are possible only on the condition that all terrorist activities be terminated on the West Bank and in the Gaza Strip. We can’t afford to have a heavily armed terrorist state next to ours. Why don’t they recognize Israel’s right to existence and sit down at the negotiating table instead of calling on the world community to respond? The fact that they have been given the status of non-member observer state will not end the conflict unless they negotiate directly with us.”

Israel is ready to make concessions and retreat. It is even ready to give back territories. The only thing it wants in return is peace and shalom. Israel wants to be left alone so that its citizens aren’t attacked or killed anymore. The Sinai peace treaty could serve as a graphic example of Israel’s willingness to compromise. It withdrew from the peninsula entirely in 1982 having received non-aggression guarantees from Egypt. Since then Israel and Egypt have been on pretty good terms with each other.

Israel is a peace loving nation. Whether you stop by in Netanya or Tel-Aviv, or Haifa, or Ashdod everything around you speaks of peace and prosperity. And it’s only the armed young men and women in uniform – a common sight to see – remind you that since 1948 this nation has had to constantly defend itself from war.